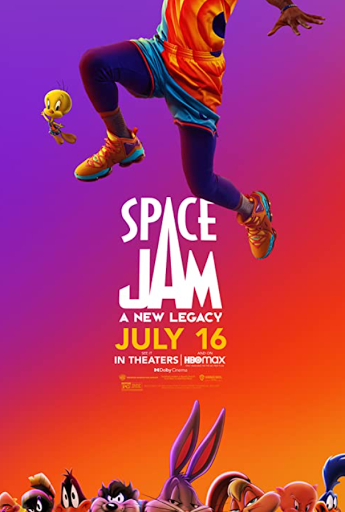 Lebron James is a legendary basketball player, but his son Dominic wants to design video games. One day, while visiting the Warner Bros Studio to learn about the upcoming VR website WB 3000, Lebron thinks it’s a stupid idea, which infuriates super-intelligent AI Al G Rhythm. Al transports both Dom and Lebron into the Server-Verse, which is inspired by Ready Player One, and the only way Lebron can get Dom back is to beat him at a basketball game. When Lebron gets dumped into the Looney Tunes world (which is one of the many worlds in the Server-Verse), he has no choice but to team up with Bugs Bunny and reunite the Tune Squad for the basketball event of the century.
As I am typing this, Space Jam 2: A New Legacy has a shockingly low rating of 34% on Rotten Tomatoes. However, I think it’ a great film for the summer with a solid story, excellent visual effects and animation from ILM , Yowza! Animation, and Reel FX, enough Easter Eggs to fill up three Pixar films, and a threatening villain who’s years ahead of, say, Scarlett Overkill from Minions.

Remember how Chuck Jones and Joe Dante felt that in the original Space Jam, a lot of the old Looney Tunes characters were used poorly? Well, in this movie, Bugs Bunny, Daffy Duck, Porky Pig, and the rest of the gang each get their moment in the limelight. There’s even a seen where Porky engages in a rap battle with Al, and it’s actually kind of catchy!
Cartoon Network (@cartoonnetworkofficial) • Instagram photos and videos
For those still uncomfortable with the over abundance of CG films from the likes of Disney, Pixar, DreamWorks, and Sony, most of the scenes with the Looney Tunes characters are in 2D. While they don’t look as well as they did in Space Jam or Looney Tunes: Back in Action, it’s still a breath of fresh air in an ocean of CGI films.
In conclusion, while it obviously doesn’t hold a candle to The Mitchells vs the Machines, Space Jam 2: A New Legacy is a worthy film from Warner Animation Group that is sure to get them out of a financial rut: In the past few years, films like The LEGO Movie 2 and Scoob weren’t able to recoup their budget. With Space Jam 2, however, it’s got to earn at least 300 million dollars at the box-office by the end of the summer. Besides, it's gotta be better than The Boss Baby 2: Family Business.
Rating: 3.6 stars out of 5.
Posted by Andrew Saterale at 5:01 PM